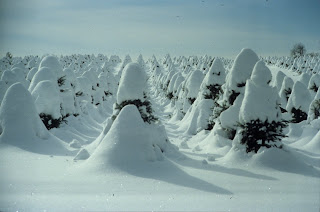 If you’re hoping for an environmentally-friendly Christmas this year, consider the following facts about trees and tree farms before you decide what to trim this holiday season:

• There are about 500,000 acres in production for growing Christmas Trees in the U.S., helping to preserve green space.
• Christmas tree farms are home to wildlife such as deer, turkey, fox and countless species of birds.
• Tree farms help to stabilize the soil and protect water supplies.
• Real Trees are a renewable, recyclable resource. Artificial trees are manufactured using harmful and non-renewable materials such as vinyl and lead.
• There are more than 4,000 Christmas tree recycling programs throughout the United States. Recycling ranges from chipping trees into biodegradable mulch for playgrounds and hiking trails to using whole trees as natural erosion control along slopes and stream banks.
• For every Real Christmas Tree harvested, up to 3 seedlings are planted in its place the following spring.
• There are about 21,000 Christmas Tree growers in the U.S., and over 100,000 people employed full or part-time in the industry.

Dan Beloin is a second-generation tree farmer in Colebrook. He took over the farm from his father, Eugene, in 1991 and has since sold portions of the 500-acre Beloin Tree Farm property to brothers Fernand and Ronnie. Each brother manages his own section, but they share equipment and other resources.

The Beloins have 250 acres planted in trees, mainly Fraser and Balsam firs, with a few other species also in the mix. The remainder of the property is working forest, and the family harvests some lumber each year. The farm has been in the Beloin family since Eugene purchased the land in 1948. He used to run a small dairy farm there, as well.

Two other retired brothers and a nephew also work the farm, as does Eugene, now 89 years old. A sister, Emily Langford, has a wreath business, Emily’s Wreath Factory, in nearby Northumberland, and supplies Dan’s retail stand with wreaths. (There are six Beloin brothers and seven sisters altogether!)
Dan is also a director of the New Hampshire-Vermont Christmas Tree Association. We caught up with him in July, when a series of rain storms had chased him inside:
With so many family members working together, how does that dynamic play out?

We each own our own section. We’re all growing trees, but we all share the equipment and work together. It works well. I’m the biggest mouth, I guess – I’m the salesman for all the trees. We put all our trees in under the Beloin Tree Farm name. It gives us a better selection for our customers – we have a much better inventory for the buyers.

Do you all grow the same types of trees?
Basically my two brothers grow Fraser and Balsam. I’ve expanded into blue spruce, Korean Fir, Turkish Fir, different things. I have a big retail stand, too, so I offer different things there. On the retail end it’s trees and wreaths, kissing balls, roping and that kind of thing. My sister is the wreath expert. She makes a lot more wreaths than what we can handle. She’ll buy brush from us, and we buy some of her wreaths.
How many trees to you sell on average in a year?
We’re real close to 10,000. I’d say in five years we could be closer to 20,000. We’ve got a lot of acres of 4-foot-high trees right now. Last year I shipped as far as . I have shipped to before, and . But 80 percent of the trees stay in . Ronnie has a choose-and-cut operation, because he’s right on Route 3. I have a retail outfit in and sell about two trailer loads (1,200-1,400 trees) there. The rest are all wholesale – tractor trailer loads to nurseries or whoever. Feed stores, ice cream shops.
How many people to you have working for you at the farm?
I have one full time, and he’s my nephew. So, we actually have three generations working together. My dad’s 89 and he’s still puttering, doing whatever he can. At 89 he’s a little bit slower, but he’s always doing something. When it comes to harvest, I can have as many as 15 men working.
When did you start working on the tree farm?
I can remember not being able to drag a tree but trying anyway. We had a dairy farm here up until 1982. We sold off the cows and just kept expanding on the Christmas trees.
What do you enjoy most about your work?
The diversity of the work. You don’t get stuck in a rut of doing just one thing. Sometimes you’re a mechanic, sometimes you’re an electrician, sometimes you’re whatever. There’s shearing, then there’s mowing, and then there’s spraying and fertilizing. You’re changing jobs every day, every week.
What is the most difficult aspect of the job?
The most boring job that I would rather pass off but can’t is inventory – actual flagging of the trees to know what we have for sale. The biggest challenge is maintaining a certain level of production. You can always go up. But if you start backsliding and losing customers, then try to regain them two-three years later, that’s hard. Also, dealing with the elements. This summer, totally out of my control, the rain. I’m going to have to buy fungicides for the first time in my life. My blue spruce are being attacked. Mother Nature leads and I just follow.
What do you do for fun?
Work. It’s six days a week, pretty much. It’s very time consuming. You’ve got to pay attention. The biggest slack time is after Christmas. We don’t do anything for two or three weeks, just because. I also like hunting, fishing.
Do you have any changes planned at the farm?
The biggest asset of all is knowing what’s going on in the industry, keeping up to date with new trends, new ideas, new techniques. I like to branch out a little bit to different kinds of trees, just to experiment a little bit. It’s always changing. I guess the biggest challenge is to keep up with it. It’s a continuing education. If you don’t keep up with things, you fall behind.
What is something you think the average Christmas tree buyer may not know about tree farming?
They don’t realize the amount of time involved. They think you just put it in the ground and wait ten years. I have to touch every tree at least four times a year. There’s a million touches going on every year. It’s year-round business. As soon as the snow melts, we’re out there base pruning or spraying or whatever it takes to get things going. It’s a hard business to get started. You’ve got to put in for 10 years before you get something out.
It must be nice for your dad to see the farm still in operation and still in the family.
I’m sure it puts a lot of pride in his heart. I’m not doing this because I’m stuck here. I want to be here. I suppose if I was to cut my arm, I’d probably bleed tree sap.