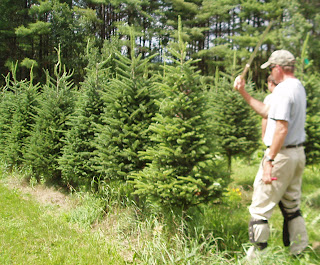 How did you get into Christmas tree farming?

“I more or less started around 1985. I’m trained as a forester, and at the time I was a county forester in . There’s quite a few Christmas tree growers in that area, and I just became interested in it. So I started to dabble in it a little bit. I like the land. I like farming. One thing led to another, and now I’m basically in it full time. It’s good work. I enjoy it. I still do some forestry work, but not a whole lot.”

“My wife, Jane. She just happened to have some property here when I met her. I had my Christmas trees growing in several other locations, and this property is well suited to growing Christmas trees. So, we started growing trees here also.”

Do you still have trees in other places, too?

What is the size of your farm?

What types of trees to you grow?

“Fraser, balsam and firs. I’ve dabbled in a few so-called exotics, and I continue to do that, but those three are the basics. I’m trying Korean fir now, and I think that has some promise.”

How many trees do you sell each season?

“Right now we sell an average of about 4,000 per year. We are open for choose-and-cut. We also sell into the wholesale market – Rotary clubs, fire departments. Jane and our daughter, Heather, also make beautiful wreaths, which we sell here.”

What is your favorite part of growing Christmas trees?

What is your least favorite part of growing Christmas trees?

“Dealing with diseases and insects. Sometimes it’s very difficult to control. The summers of 2007 and 2008, we had a tremendous amount of precipitation, which led to a big increase in a certain root disease. We’ve started putting in some subsurface drainage. Since Fraser is the most susceptible, I’m planting balsams and Canaans in some of those places.”

What do you like to do when you’re not working?

“I like to hike. I like it here in the mountains. And I hope the Patriots make it to the Super Bowl.”